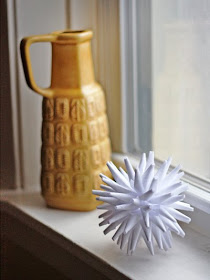 I love spiky starburst shapes, so I attempted a version of the traditional Polish porcupine ball. Here's how to make this cool 3D ornament—great for Christmas or decorating any time. I can imagine jumbo sized versions hanging at parties or weddings. They take awhile, though, so you'd better start making them five years before you plan to get married. 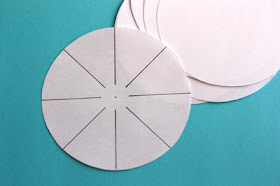 1. Cut out ten paper circles, using a jar lid or CD for a template. (My circles are 5" in diameter. I stacked sheets of computer paper and cut out several circles at once.)

2. In each circle, cut eight evenly spaced slits toward the middle, stopping about a half inch from the center point. 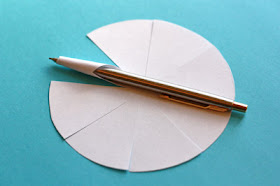 3. With a pointed pen or sharp pencil, curl each tab into a cone and secure with a dot of glue. If you can pull off a tightly rolled perfect point, congratulations. I was running a little low on patience and settled for "sort of pointy," which I think also looks nice. 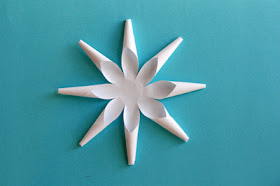 4. Cut two small pieces from a wide rubber band. These will hold the ornament together at each end. 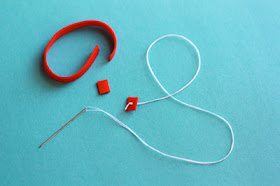 5. Thread a needle and knot the ends of the thread together. String on one of the rubber band pieces. 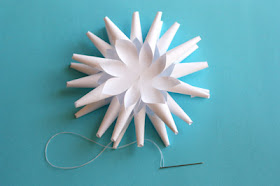 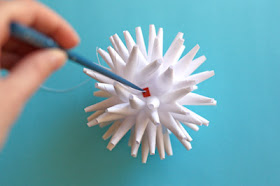 7. With a chopstick or pencil, push down on the rubber band to compress the stars into a ball while pulling upward on the string with your other hand. The rubber should hold the stack together without requiring a knot. Adjust the paper cones as needed to make a pleasing shape.

8. Tie a loop in the thread for hanging if desired. 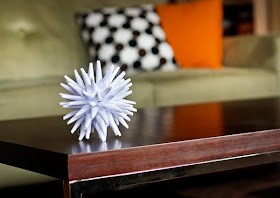